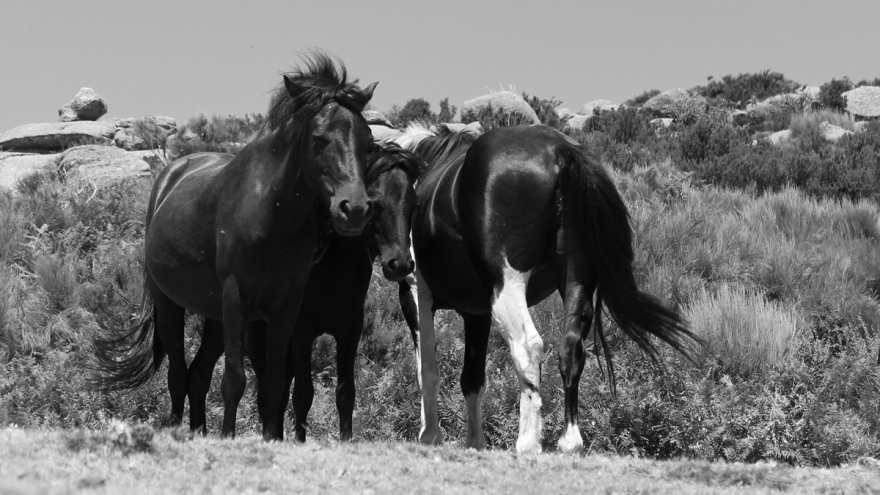 When I think of how feral horses are portrayed in the arts and media, the powerful image of battle-scarred stallions “striking madly at each other” — to quote the author Walter Farley — frequently comes to mind.

After all, it’s one of the images most often seen on-screen, usually accompanied by some description along the lines of stallions fighting for “supremacy” or “dominance” over a herd of mares.

Another typical image is the mystical one of a “lead” or “alpha” mare, leading the band (family unit) with her wisdom and strength of character; sometimes said to do so alongside the “lead” stallion.

As ethologist and horse trainer Lucy Rees has put it: “There’s a lot of fantasy written about wild horses.”

Last year, as I told people I was going to travel to Spain that summer in August to attend an equine ethology course, I was, more than once, met with a look of concern when I mentioned that it involved the actual study of feral horses. Even before asking me whether I was sure about it, I could sense that they thought of it as something insanely risky to do. Can’t say I blame them, considering the reputation that feral horses — and wild animals in general — have.

I had read books by Lucy; read about the Pottokas and how feral horses reveal a great deal about their domestic counterparts. Reading is one thing — and it certainly serves its purpose — but seeing, observing, and learning to objectively record what one observes is another. It was a trip that had been on my mind for the previous two years and at last I took the plunge.

For three days before my flight to Madrid, I spent time with a large group of about eight broodmares and their foals at a stud farm in the north of Poland.

Imagine my discomfort once I realized, in hindsight, that they were being kept in far too small an enclosure compared to the amount of space that a single, smaller band of Pottokas would have as their home range. How aggressive the broodmares were to each other and each other’s foals — no doubt aggravated by the lack of a stallion’s presence, along with the lack of space — compared to these “wild” (more like civilized) ponies. And how hesitant the domestic foals were in the presence of humans, compared to the curiosity and relaxed demeanor of the Pottoka youngsters.

Despite being aware of the fact that domestic horses are overall more stressed than feral ones, I was still gobsmacked by how unruffled the Pottokas are. Nervousness is widely perceived to be an essential part of the nature of horses, and it’s unfortunately not unusual to come across the statement that they are “dangerous” and “unpredictable” animals, to be kept under constant control.

When studying the Pottokas, popular beliefs about horses — such as the one that their social structure is based on a dominance hierarchy — completely fall apart. I saw how band movement can be initiated by a three-day-old colt wandering off to explore. While on the move, the stallion, being the protector, follows his band rather than leads it. And not once did I see — or any one of us in the study group see — evidence of an “alpha” mare.

I even got to witness a scuffle between two stallions.

One evening during a theory session at the Majada — a traditional stone hut where students can spend the night — we suddenly became spectators of a muddle that ensued nearby as three bands (Txito’s, Erbi’s, and Beltz’s) crossed paths. Poor Txito ended up losing track of his small band — a yearling son, a black mare, and a piebald filly named Esku; I still vividly remember him galloping up and down the glade near the Majada, anxiously searching for them.

The following day, we watched the drama unfold as the black mare and the yearling were found by Erbi, who tried herding them into his own band. The mare’s noisy protests were not in vain, as Txito happened to be close by. The stallions found themselves in an awkward stalemate, as Txito was persistent in wanting to retrieve the mare and their son; Erbi, on the other hand, was dead set on keeping Txito away from his mares.

Lots of melodramatic squealing, foreleg strikes, and running around took place, but it came nowhere near the level of violence we see in popular depictions of fighting stallions; I can even recall at least one spell of parallel grazing. In the end, Txito and Erbi quietly reached a truce. Erbi let the mare and her colt return to Txito, and there couldn’t have been a sweeter reunion.

Later on, as I watched Txito loaf in the shade of oak trees together with his mare, their son dozing between them, my heart sank; I thought of how stallions in domesticity are commonly sentenced to social isolation, their consequently deranged behaviour believed to be “normal”.

It’s by observing those that are untouched — horses that are strangers to bridle, saddle, or whip, strangers to the oppression of confinement and the subjection to misguided, anthropomorphic ideas — that you get what the true nature of the horse is like.

I must add that it wasn’t only the Pottokas who made that trip so memorable. In those nine days spent in Piornal with Lucy, the volunteers, and fellow students, I grew up a little more, making new friends along the way. It felt akin to being part of one big, extended family; a sense of community that’s hard to find.

Needless to say, I left the place with my heart dragging on a leash, and an insatiable yearning to return.

Horses have hoofs to carry them over frost and snow; hair, to protect them from wind and cold. They eat grass and drink water, and fling up their heels over the champaign. Such is the real nature of horses. Palatial dwellings are of no use to them.

This site uses Akismet to reduce spam. Learn how your comment data is processed.

Artwork, images & text ©2020 Yasmine Saad / Libera equa, except where noted otherwise. All rights reserved. Permission for any form of reproduction must be granted by the artist.